Germany produced a record amount of electricity from solar on Sunday and is set to exceed that again on Tuesday as a heatwave grips Europe.

About 38,174 megawatts were generated from solar panels on Sunday and high levels are expected through Wednesday. A fresh record is possible on Tuesday, with a maximum 38,190 megawatts forecast.

A brutal heatwave is moving into western Europe, baking many areas. Temperatures are set to peak on Tuesday and Wednesday in Germany as the heat begins to ease elsewhere, according to state forecaster DWD. The extreme temperatures are sparking wildfires in Spain, France and Greece. 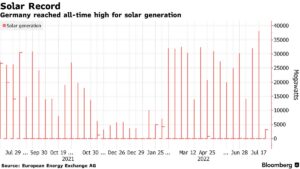 “Historic heat is forecast to take hold of parts of western Europe this week, where all-time record high temperatures could be recorded,” Maxar Technologies LLC said in a report.

The UK may see the highest temperatures ever recorded, with forecasts at London-Heathrow of 38.5 degrees Celsius (101.3 Fahrenheit) on Monday and 40 degrees on Tuesday. It will hit 42 Celsius in Nantes, France Monday, also a new record. Paris will have a high of 39 Celsius today and 40 degrees tomorrow, according to Maxar.

German power for today rose to 396.07 euros ($400.27) a megawatt-hour, the highest since March on Epex Spot SE. Power supplies are short as warm air is reducing wind generation leaving solar to make up the shortfall.

The French nuclear fleet is reduced as river temperatures warm beyond permitted levels for cooling. Some coal-fired plants along the Rhine river in Germany are unable to get supplies of fuel as river levels drop.