Low pressure will track through the region Monday into tonight, providing much of the area with a beneficial rainfall – but it will come with a cost, as we may have to deal with some severe weather as well.

It’ll be warm and muggy today with showers breaking out from west to east this morning, with some of those possibly accompanied by thunderstorms along with heavy downpours as a warm front passes through the region. The main concern this morning into this afternoon will be the possibility of localized flooding, especially across interior portions of the region. We’ll continue to see the threat for showers and storms throughout this afternoon, but there could also be dry periods, especially over southeastern New England.

Another round of showers and storms will develop this afternoon which may contain some severe storms, especially across western Mass., western Connecticut, and southern Vermont. These storms may produce damaging winds, hail, heavy rain and an isolated tornado, which has prompted us to put a First Alert Stamp on today’s forecast. 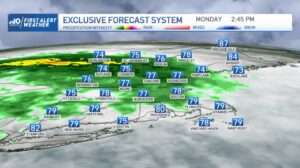 In terms of rain, interior New England, including central and northern New England, may see up to 2-3 inches of rain which again, may cause some localized flooding, while eastern areas of southern New England will see half an inch to an inch of rain, with lesser amounts across southeastern Mass. and Rhode Island. At this point, any rain is a welcome sight as much of the region is dealing with a moderate drought, with severe drought conditions from Boston into northern Mass. and southern New Hampshire.

Highs will reach the upper 70s to mid 80s today along with an increasing south wind which will gust over 25 mph later this afternoon and evening. 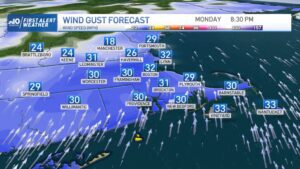 Showers, downpours, and storms will continue to shift northward overnight with the threat for severe weather diminishing during the course of the night. Winds will also be a factor as they gust out of the south over 30 mph, with higher gusts possible across the Cape and Islands. Lows in the upper 60s to low 70s.

A lingering shower or storm is possible along the coast Tuesday morning, especially over Downeast Maine, with clouds decreasing as low pressure quickly pulls away from the region. The afternoon is setting up to be hot and a bit on the humid side with highs reaching the upper 80s to low 90s along with a gusty west wind. 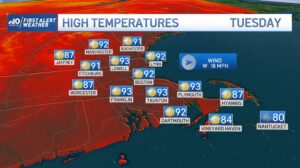